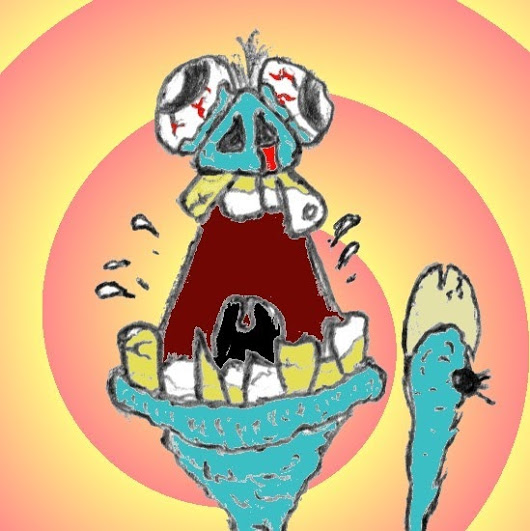 I feel this need to update my social media as soon as possible. This may stem from the fact that it's just there, in my hand. The immediacy is attractive. Potentially millions of people could see my thoughts at the very instant that I have them. In reality it's closer to tens of people. And of those tens who really gives a toss? The only person who's guaranteed to is me, and even I waver in that commitment sometimes.
The other reason why I feel pressure to update my on-line thought stream as quickly as possible is that I'm likely to forget what I was thinking by the time I reach a real computer. In fact it's more than likely that between the moment of inception and the sitting of the tuckus I'll probably have forgotten a ton more besides.
So it was that I was updating my feed with a witty, insightful quip about how our social media "feed"s are akin to pig troughs flowing with mush, when I bumped into a crow. It was 10:48 in the morning and the crow had little business loitering around my personage. It gave me a croaky grumble and straightened the feathers on its left wing upon which I'd very almost trodden.
We looked each other up and down. Its appearance was as common as would be expected. Dressed in black right down to its toes, the colour had a slimming effect and was rather trendy. Shiny eyes and smooth beak suggested youth and burned with a fire of rebellion. Perhaps it was a punk, out causing trouble while its parents were at work.
From its point of view it surely saw a tall man, stuffed to the cuffs with rugged masculinity. A picture of late teenage virility (about 15 years late). Clearly a pillar of the community and shinning example of human perfection.
It made a scoffing sort of huff, as if it sensed my flight of fantasy.
I decided it was time to be off. I stepped left in order to skirt around the bird in that direction. It stepped right, its right, stepping in front of me. I moved back to my original, central location. It did the same. I stepped right in order to navigate that way. It stepped left, its left, stepping before me once again. I returned to centre. It did the same.

I laughed awkwardly. It cackled in its own way.

"Perhaps I should just go home," I said to myself and the wind.

"Perhaps you should," said the crow.

I turned around and started walking the way I'd come, then stopped and looked back. The crow was in the same place, looking at me calmly.
I thought about saying "Did you just talk?" but instead I just made a non-committal "mmm" sound.

"No, nonono. Oh, no, fine. Well, I guess. I guess it's not a problem. Well, at least it isn't to me. I suppose it could be for some people, but I'm quite easy going really. 'Brown-trouser-wearing liberal do-gooder' my friends call me." I choke-laughed. Looked down at my blue jeans. Looked back at the crow. Was silent.

"Or a fly." The bird let out a short squawk. I wasn't sure if it's response had been jovial or accusatory. Had I just been accidentally racist?

"Well, anyway, I'd better get going. I've got some shopping to do and I'm sure you, you ... have things to do .."
"Like ripping open rubbish bags with my bare beak, ya mean?" It squawked again, louder this time. Still couldn't quite infer the tone. Was I being ... specieist?

Not wishing to cause further enragement I got out of there swiftly. Before turning the corner at the end of the road I took one last look back. The crow was still there, but he'd been distracted by a piece of tin foil on the ground.

A few moments later my Tweet read:
"Think I just insulted a crow. Hope I didn't caw-s offense."
It got 3 Likes and no Retweets.